Written by Brendan McInerney on November 17, 2021

Antonio Reeves, who entered the game as the nation’s second-leading scorer, guided the Redbirds with a team-high 19 points, while Mark Freeman scored 15 and Sy Chatman 14. ISU made 43% (24-of-56) of its shots from the field and knocked down 30% (7-of-23) from beyond the arc.

After trailing by 16 points at halftime, the Redbirds cut the margin to six points on three occasions, including with about 2:30 left in the game. However, inconsistent defense wouldn’t allow the lead dwindle to a smaller margin.

“It was a tale of two halves,” said Chatman. “We came out slow defensively in the first half, and in the second half we tried to pick it up but it just wasn’t enough.”

The Redbirds were limited to just 12 free-throw attempts when they entered Tuesday averaging 30 per game. However, the most glaring stat of the night was the Racers’ 16-7 edge in offensive rebounds against an ISU team that thrives at that part of the game.

“Our lineup we had in the second half was small, which has been our starting lineup for the first two games,” said Muller. “When we’re that small our guards have to rebound.”

Guards Tevin Brown and Justice Hill led the Murray State offense as the Racers shot 47% from the field on 33-of-70 shots. The Redbirds were outscored in the paint, 48-28.

“We knew it’d be the most physical game we play in this early season, and we certainly saw that,” said ISU head coach Dan Muller. “Defensively, breakdowns in the first half killed us and our offense wasn’t very good. In the second half we competed but the boards really hurt us. You can’t dig yourself a hole against a good team like that.”

A pair of three-pointers from Reeves ignited a 13-2 run early in the second half that got the Redbirds within 48-41 with 15 minutes remaining.

A couple minutes later, Kendall Lewis rattled in a three-pointer of his own to pull a little closer as the Racers led 56-51 with 11:08 left.

Some back-and-forth action allowed for one final 9-2 run by the Redbirds that settled the lead at 71-65 with 3:17 left. But the high-powered Murray State offense turned out to be too much for the Redbirds, as the Racers were able to attack the basket at will for a streak of layups.

“Every time we were right there, we turned it over or they made a big shot,” said Muller.

The Redbirds (1-2) will be back in action this Saturday when they host Bucknell at 6 p.m. at Redbird Arena.

“We’ve just got to get off to a better start, that’s what it all boils down to,” said Freeman. 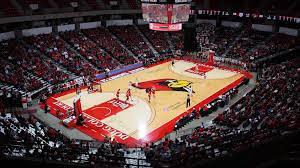