Junior Kaylee Martin started the scoring for ISU with a kill to open the first set, but it was a back and forth effort from both teams.

After seven ties and five lead changes, the Crusaders found themselves with a 13-11 advantage.

The Redbirds would eventually cover up some holes exposed by Valparaiso and used an 11-6 run to take their largest lead of the match, 22-19.

Freshman Taylor Lynch would put an end to a late Crusader rally with a kill to give the ‘Birds a 25-23 opening set win.

It was another back and forth affair to begin the second set before Valpo started to pull away with their largest lead of the match 15-9.

The Redbirds would respond in a big way, using a 16-6 run with three straight points to seal a 25-21 set two win.

Illinois State had opportunities to pull away in the third set, jumping ahead 12-9 and 17-14, but each time the Crusaders would use a 3-0 run to tie the set.

The ‘Birds would eventually pull away with a 24-22 lead and were in position for their fourth sweep of a MVC opponent.

The victory would be put on ice however, as the Crusaders scored four straight points to steal a 26-24 win and force a fourth set.

“They were reading us like a book,” ISU head coach Leah Johnson said. “We didn’t have enough offense diversity and that gave them the competitive advantage.”

Valpo was still riding momentum into the fourth set, jumping out to an early 8-3 advantage.

As many opponents who travel to Redbird Arena know, beating the ‘Birds on their home floor is no easy task.

ISU would rally on a 12-6 run and take their first lead of the set, 15-14 thanks to a service ace and kill from Martin.The Redbirds would pull away from Valpo, this time for good, defeating the Crusaders 25-21 in the fourth set.

It wasn’t the prettiest win, as ISU committed multiple errors to keep Valparaiso in the game.The sloppy play is something Coach Johnson wants to fine tune as the team begins the second half of their conference schedule.

The last time the two teams squared off, the ‘Birds got the best of SIU in a three game sweep earlier this season. 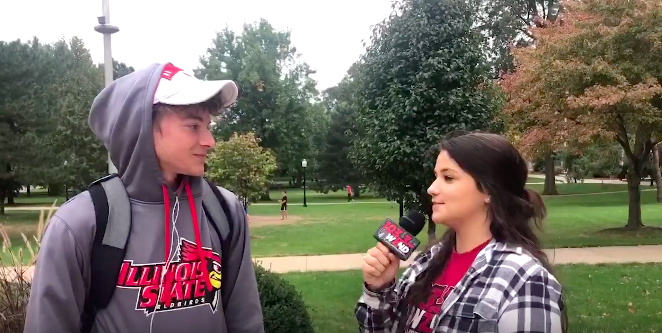