The first inning of the first game saw the visiting Ramblers score first, with Allyson Ivey getting an unearned run due to an ISU error. After a scoreless second inning, the Redbirds put themselves on the board in the third. Star junior Mack Leonard ripped off a single-run home run, with Dayna Kennedy bringing in Kaili Chval on a sacrificial pop fly.

After Loyola tacked on another run in the fourth, Illinois State responded with three of their own in the fifth. A double by Dayna Kennedy allowed Mack Leonard to score her second run of the afternoon. Following this, freshman Jayden Standish doubled for herself, allowing Kennedy and Emme Olson to cash in as well. The Redbirds and Ramblers traded two-run homers in the sixth and seventh innings respectfully, leading to a 7-4 ISU victory in game one.

Mack Leonard was a top performer for the Birds, tallying three hits, three RBIs, three runs, and two homers. Head Coach Melinda Fischer speaks on how impressed she is with Leonard.

“She’s a remarkable athlete,” said Fischer. “She has the mindset that she’s going to get the job done, and she goes out there and gets it done.”

“She’s made tremendous strides in not only her technique and her repertoire of pitches, and just in her self confidence,” said Fischer.

The second game began similarly to the first, with a Loyola score. Scoring for the Ramblers was Amelia Thomas thanks to a single by freshman Sydney Barnett. Neither team would score a run again until the fourth inning.

Illinois State had been unable to record a hit since Chloe Jefferson did in the second inning. The trend continued until the bottom of the sixth, with a single by Jayden Standish ending the drought. The hit did not lead to any runs.

With the seventh and final inning underway, a comeback seemed unlikely for the Redbirds. But Morgan Day, who relieved Mack Leonard in the fourth inning, pitched a quick three outs in the top of the seventh. This meant ISU needed to overcome a four-run deficit with half an inning remaining.

A flurry of Redbird hits set up loaded bases, with Mack Leonard up to bat. Knowing what Leonard is capable of, senior pitcher Madison Veres intentionally walked her. This put ISU’s first run on the board, and kept the bases loaded. Kaili Chval singled on the next at-bat, bringing freshman Madi Bylak home. Then Emme Olson, who doubled in the first game, doubled yet again. The game was now tied at 4-4. Sophomore Dayna Kennedy secured the comeback victory with a single, which sent Kaili Chval home for the winning run.

The outcome looked grim for a majority of the second contest, but Head Coach Melinda Fischer said the team never doubted the possibility of a comeback.

“Never a doubt. I think we had a lull throughout that second ball game. But never a doubt in that last inning that this team could do that,” said Fischer. “You ask anybody in that dugout, everybody thought that this was a possibility.”

The thrilling sweep elevates ISU to 18-4 overall on the season, with a 5-0 conference record. They maintain their number one spot in the MVC, and will travel to Indiana State this Friday to take on the Bulldogs in a three-game series. 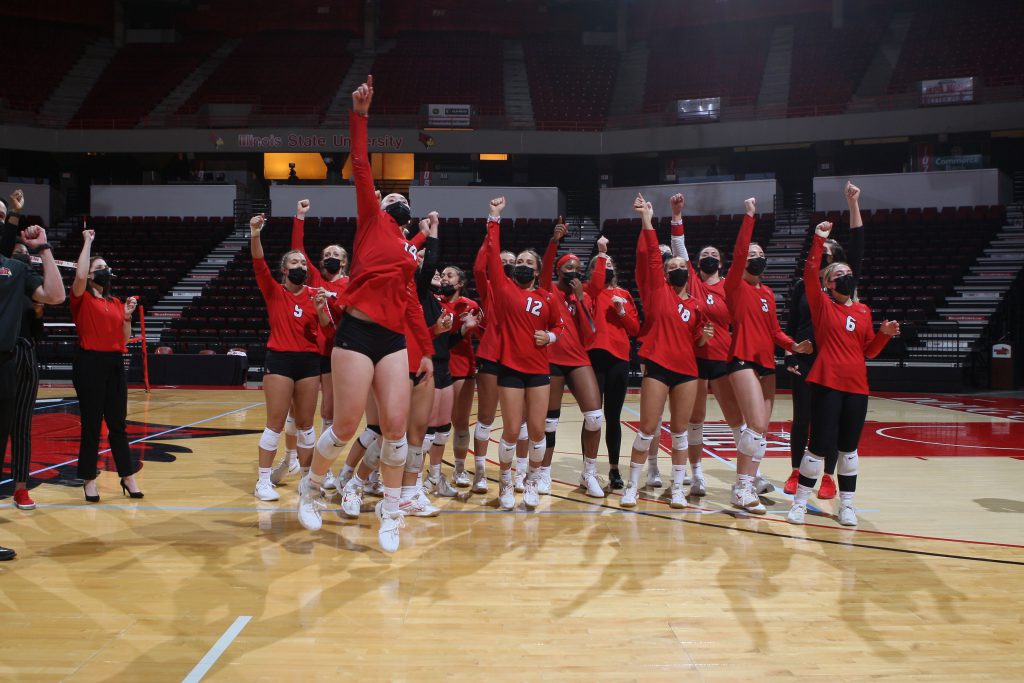