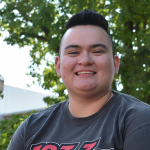 DaBaby has been making some noise in the rap community lately, with tracks like “Suge” and “Baby Sitter feat. Offset” making their claims to fame amongst fans and becoming some of the most popular tracks in the nation. Both tracks were also seen on his album Baby on Baby, which he released back in March 2019. Well he’s back and better than ever with his new album KIRK.

Released on September 27th, 2019, KIRK is an excellent sophomore album for DaBaby. He starts to open up to his fans on this record, showing everyone that he can go far more in depth than before. On tracks like “INTRO” and “GOSPEL”, he talks about the death of his father, and how it affected his life as he was rising to fame, and ultimately shaped him as an artist. It’s a crazy change from what we usually see from DaBaby, but he makes sure to include his signature loud and gritty sound.

Tracks like “BOP” and “REALLY” feature some loud 808s and hard verses that really remind you that it’s a DaBaby track. The album is full of bangers, but this turns out to be somewhat of a double-edged sword as it goes on.

Sitting at 13 tracks, the songs all start to meld together after a while, with tracks like “VIBEZ”, “REALLY”, and “THERE HE GO” all sounding like the same loud, 808 heavy song with the typical DaBaby flow, which has already been seen on tracks like “Suge” and “Baby” feat. Lil Baby.

This doesn’t take too much away from the album, however, as the features from Moneybagg Yo, Chance the Rapper, Nicki Minaj, and Stunna 4 Vegas, and Migos being a great addition to the album. This helps save the tracks where other artists like Lil Baby, Gucci Mane, and Kevin Gates fall through, which is mostly due to the length of their performances, as they start off strong but quickly begin to show the cracks and flaws in their verses. This makes it even more impressive for rappers like Chance & Moneybagg Yo, as they completely dominate their verses and help keep their songs energized and exciting to listen to.

Although the album starts to feel like somewhat of a chore to listen to after a minute, it is still a fun project to listen to overall. The tracks manage to stay hyped, while still adding a layer of depth to DaBaby’s music. He talks about his struggles adjusting to fame after the death of his father, and how it changed the course of his career as he began to blow up. There are plenty of standout features, particularly from Stunna 4 Vegas, Chance the Rapper, Nicki Minaj, and Moneybagg Yo, and they help keep the album fresh and fun to listen to.