Plans on the Illinois State University Campus After Train Derailment

Written by Camberyn Kelley on February 13, 2021

NORMAL, Ill. – Residents and students in Bloomington-Normal are looking for answers after a train derailment occurred this morning between Vernon Avenue and Fell Avenue.

It is unknown if students in the vicinity will lose power throughout the day. Director of Media Relations at Illinois State University, Eric Jome says that the university is watching the incident closely and making adjustments to accommodate people based on updates.

The Bone Student Center is open during its regular hours and many students are flocking there to keep warm and to get food. Jome mentions that the student center is not officially a warming center for students.

“It’s open for its regular business hours and we’re not necessarily declaring that it’s a warming center. Again, it’s just sort of open for its regular hours, so if people want to go there, they’re certainly welcome to do that,” said Jome. “We’re not making a formal announcement at this point that this is an official warming center or something. It’s the student center operating on its normal hours.”

Jome says the Bone will accommodate and adjust hours if need be. He mentions that students in the area who have concerns are able to contact the Dean of Students Office through email.

Ameren Illinois, the local gas company is now working with the Union Pacific Railroads to complete repairs without major impacts to residents and people in the surrounding area.

“They’re going to be working on moving those train cars out of the way and they are in contact with the town of Normal, County, the power company and lots of other people,” said Jome.

Illinois State University Housing’s emergency response committee has been monitoring the situation closely and has back-up plans for their residents.

Assistant Director of Marketing and Assessment, Ed Campbell says there are some solutions for residents that might be worried if Watterson Commons has to shut down due to the outage.

“Yes, absolutely we have the Marketplace at Linkins Dining Center still open and the various food venues still around campus operating as well. We’ll always do whatever we can to support the students. I think in the past we had some situations where students couldn’t travel to dining centers, we have delivered food to students,” said Campbell.

Campbell mentions that Housing has been through unprecedented moments before.

“I think just last year during the polar vortex then we had to set up some food and stations and extra support in Hewett-Manchester lobby to support our students get them what they needed,” said Campbell.

Campbell says the weather is extremely cold and understands the concerns of residents but he offers his support to them during this time.

“I think students don’t have a lot to worry about right now within University Housing. Watterson is at low risk right now for losing power which is good. I think what I can say is that in the event that we do lose power Watterson, it does have a backup generator,” said Campbell.

The back-up generator will not provide full power to the building but will still allow students to be warm, be able to use elevators, have emergency lighting, water functions and Wi-Fi service.

Emails should be checked regularly by residents in University Housing for any updates or if there any risks, said Campbell. The Housing website also has an announcement section for students who want to stay informed. Watterson could also be used as a warming center in the possible future if need be.

The Normal Fire Department advises people to not approach the train or tracks because there are power lines down and portions of the track or train might be energized which makes it an electrocution hazard.

There are no injuries, but traffic will be affected on many major rail crossings to University St., Fell Avenue, and Vernon Avenue and Beaufort Street railroad underpass. 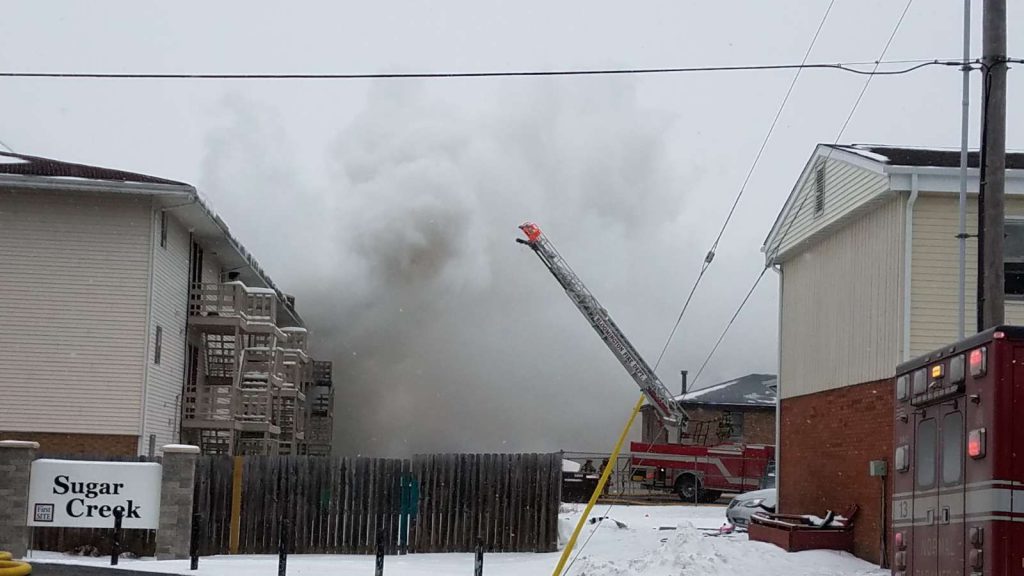