NORMAL, Ill.- On Sunday, Aug. 30, Bloomington-Normal residents gathered in GE Union Park to show their support for police officers both local and national.

Among the crowd was a sea of ‘Back the Blue’ shirts, thin blue line flags and ‘Trump 2020’ gear.

Opening the rally was Mike Jenkins of 107.7 The Bull, introducing speakers and often encouraging the crowd’s chanting of “Back the Blue.”

Focusing on the importance of police in the community, everyone from young people aspiring to go into law enforcement to politicians running for local office promoted their support of ‘Blue Lives’.

“I don’t know how they get up in the morning and keep protecting us and protecting us. I am so very grateful, and if this is some little thing I can to support them then I will show up,” said wife of former State Rep. candidate David-Paul Blumenshine and local school teacher Tayna Blumenshine. “I think our community of local law enforcement is much like national, they’re incredible. Anytime there is brutality it is taken care of right away. Their blue brothers are on them, it’s (local law enforcement) amazing and self-correcting. We have a beautiful country, and I can’t imagine what it would be like without our police officers.”

In Kenosha, according to CNN, Jacob Blake was shot in the back seven time by a Kenosha police officer. President Trump is scheduled to go to Kenosha tomorrow, but said he said he is not planning to meet with Blake’s family during the visit because they wanted to involve lawyers. “I’m not going to play politics. This is my son’s life we are talking about,” said Jacob Blake Sr., the man’s father, to CNN today, Aug. 31, 2020.

Nord spoke on the necessity of a strong police force so that entrepreneurs may feel safe to do business in community.

The fundraising group Team Blue Line promoted their efforts to support the families of officers who are killed in the line of duty. Fundraising was done by selling t-shirts and refreshments at the rally.

The necessity of respect for officers was a common theme throughout the rally, especially in response to protesters outside the park lining the gates. Security and on-duty Bloomington police officers managed the counter protesters and revving cyclists inside the gates that attended the rally. One arrest was made for trespassing, allegedly. However, Bloomington PD assured that there were no arrests or disturbances that were violent.

Over 30 counter protesters and supporters of Black Lives Matter were present and wearing masks outside GE Union Park, making their message heard.

Chants of ‘no justice, no peace’ were hard to ignore being that one could hear the chants off in the distance from within the park. 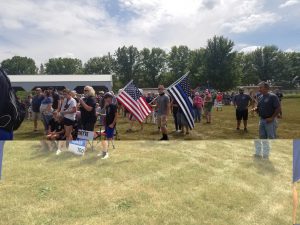 Many attendees at the rally were unmasked and carrying American flags. Country music and revving motorcycles blared through the park.

“Too many officers are being complicit while other officers are doing bad things. They’re shooting people in the back, shooting unarmed black people and that isn’t right,” said counter protest organizer Sonny Garcia. “If police officers want the community to trust them, then we need officers to come forward, without retaliation from their co-workers from the police union, they need to do the right thing and do their jobs.”

One of Garcia’s members of a national group was a Buffalo police officer and she reported other officers for discrimination and racist behavior.

“She was not only assaulted, she was later fired from her position for speaking out against officers doing things that they aren’t suppose to be doing. That includes abusing members of the community, abusing people of color and being corrupt cops,” said Garcia. “Anytime there are good officers, who try to do the right thing, do their job and speak out against bad actors they are retaliated against.”